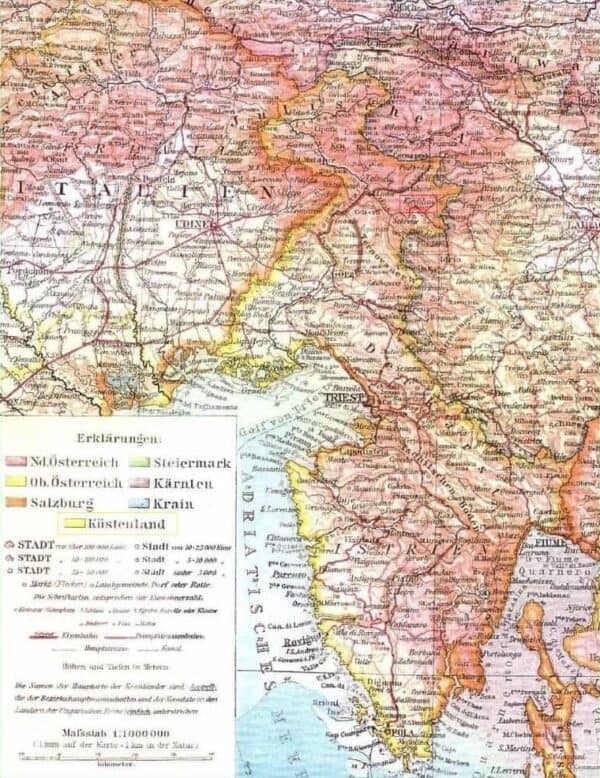 Expertise in Primorska and Istra

We do genealogical researches using Slovene, Croatian, Italian and Austrian archives. Over the years we have specialised in research using all of the archives of the Primorska region, on both sides of the border (Slovenia/Italy) and Istria (Croatia). We have particular expertise in this region because it is where we are located and the original home region for many of our clients. The main archives are in three countries: v Trst (Trieste, Italy), Gorica (Gorizia, Italy), Videm (Udine, Italy), Koper (Slovenia), Pulj (Pula, Croatia) and Reka (Rijeka, Croatia).

This territory is a crossroads of Slovenian, Italian, Austrian and Furlan (Friuli, Italy) cultures. Their inhabitants are by their origins Slovene, Croats, Italian, Furlan and German.

This region is special because the state borders have often changed during the course of history. This territory has been governed by the Venetian Republic, France (known at the time as the Illyrian Provinces), Austria, Italy and Yugoslavia. Today this territory is split among Slovenia, Italy and Croatia. Every state conducted its own census survey, kept its own registers in own official language.

Registers are written in many languages like Latin, Italian, German, Slovene, Croatian and French. Alphabets found in these registers are Latin, German Gothic or even Glagolitic. It is not easy to define nationality from registers because names and surnames were translated. Many years of experience and in-depth knowledge of local history are needed to correctly identify the right nationality.

Beside border changes there were also county, diocese and parish changes. This fact resulted in a dispersion of sources into numerous archives. One example is the parish of Jelšane which falls under the territory of both Slovenia and Croatia, with three diocese authorities in Trieste, Rijeka and Koper. Historic registers of the parish of Jelšane can now be found in archives of Slovenia, Croatia and Italy.